Can't believe I got my professor's phone number, I can't belive I gave him my phone number. What has gotten into me? Anyways, I've entered my music classroom and there were only a handful of students, atleast 25 inlcuding me...
I guess it's hard to get into the music program here...
"YOU'RE HERE TOO?!" City startled me as I took the back seat, no suprise there.
"Yeah, guess so. Didn't know there were only a few people here for music.." I whispered back as the teacher entered. City just shrugged and we faced forward to listen to our professor.
"Hello everybody! My name is Louis Tomlinson, call me Mr.Tomlinson. I'm your music professor for your years in college up until you graduate." he smiled. 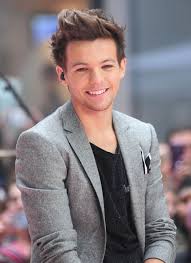 Seriously, I have to admit.. The professors I've met so far are all attractive, where the heck does this university get them?
Mr. Tomlinson was now discussing about Music classroom rules.
"This room is always open from Monday to Saturday during school hours. Not Sunday unless you get a permit and the key from the office..." he went on about things like that, I practically spaced out up until he finally started to speak about a topic I liked.
"The whole time you'll be majoring in my subject, you will need atleast one instrument, the more the merrier but you are only required with one. It doesn't matter if you got into my class for singing, you need one instrument, yes?" a girl who was a ginger had raised her hand with a question.
"Mr.Tomlinson, what if you don't know any instruments?" a few people nodded in agreement.
"Confront me after class and we can discuss when I could teach you personally but, it'll need more time." he smiled, how nice is he? He's going to teach them himself, no other professor has offered tutoring so far.
"Okay now the serious topics are done.." He clapped his hands, "Singers infront. The rest should grab an instrument of their choice from the back if you didn't happen to bring your personal one today since I didn't inform any of you.."
"What are you getting?" City asked as we stood up with the others, I looked at her as if she was crazy. "Violin?"
"DUH, idiot." I laugh, she took up violin lessons with me ever since we were 5. She took them longer because my parents didn't want me to get lessons anymore and just teach myself, not that I was bad...
"You too?" I ask, it was her turn to look at me like I was crazy. We both laugh and get a violin for each of us.
We open the cases as we sat down and Mr.Tomlinson had start calling instruments and made them position themselves where he wanted.
"This are beautiful..." City and I were in awe, we've seen classrooms which had violins before and none were as good in condition as these were. They almost seemed brand new and priceless.
We pick them up gently and lock the cases, holding them by their neck and bow in the other hand.
"Violins." his voice echoed.
City and I stood up to see everyone else had their places except us, we were the only Violinists here.
"Ah, good. Two violinists." he smiled and gestured to the empty floor beside him on his left.
We both take our places and listen as he stood in the circle we've made.
"We'll be playing How To Save A Life by The Fray, everybody know it?" he asks, the room chorused with 'yes' and 'ofcourse'. "Very good! Give us a beat." he pointed to the drummers, one was on a beatbox the other on the set of drums.
"This is a game. When I point at you, you play or sing the best solo you can while the others stop playing, only you are in the spotlight. Do the best you can to make an impression to me and everyone." he noted.
Soon, we were all playing together and the song was almost done. Almost everyone had played a solo and they were all amazing.
The song was already ending, thank God I'm out of the woods.. No need for a solo, I thought.
Spoke to soon, Mr.Tomlinson had given time for me to play a solo before the song ended.
His finger pointed to me as I tried playing the best solo in my life, I don't even remember what I played. I just got lost into it and zoned out at the sight of him astonished.
I lingered the last note as he stopped pointing at me.
"That's the end of the song..." he said quite quietly as he checked his watch,"Oh dear, I'm sorry! You guys are dismissed!"
Everyone has dispersed, putting back instruments and stuff.
City and I put the violin cases down where we first found them and started to go out the door.
"OMI. THAT WAS AMAZING." she said a bit too loudly and hugged me.
"Omi? Is that your name?" I heard from the left, it was from our professor. He had stopped talking to a bunch of girls who were flirting with him, just like Liam, to talk to me.
"Uhm, no not really. My bestfriend is the only one who gets to call me that, no offense." I say as nice as I could, "My name is Naomi, Naomi Winters, sir."
"Well, Naomi. You are one of the best violinists I've seen. See you tomorrow." he smiles and we both wave goodbye.
"WOAH. Already a teacher's pet, Omi?" City nudged my arm and we went out the building.
"Pshh. No." I laugh.
"Anyways, where are we eating lunch?" she asked, oh yeah! Liam!
"Oh yeah, by the way. Can 2 more people join us please?" I ask as we enter our car, I turn on the ignition.
"Who?" she smiles deviously, she knows I'm not the social type.
"Liam Payne and his bestfriend." I say cooly.
"LIAM PAYNE YOUR PROF IN ENGLISH?!" She yells in excitement.
"God, City. I swear one day you'll get me deaf." I scold her, "And yes, my english professor Liam Payne."
"OoooOOooooh. I knew you were drooling over him!" she taunts me, I just roll my eyes at her.
"Don't be silly, I'm not attracted to him. He's good looking but, no thank you." I smile and pull out my phone to dial his number, 'before you embarrass me or anything. I've got to call him." and I hold out a finger to shush her and I put my phone up to my ear.
"Hey, Liam!" I say nicely.

I enter Louis' classroom, he's teaching music. He was packing up some papers into his bag while I knocked on his door.
"LIAAAM!" He yelled and dropped his papers and ran to me, I met him halfway and hugged him.
"LOU! God, seemed like we haven't seen in ages when we saw each other a few hours ago."I laughed and he shrugged, he went back to his papers and collected them. I decided to help him out, suddenly my phone started to ring.
Louis and I looked at the caller ID to see Naomi was ringing me.
"She's the-" before he could continue I smushed my hand on his mouth to silence him.
"Hey, Liam!" she chirped.
"Hello, Naomi." I answer.
"You two ready to get picked up?" she asked, oh yeah.. I haven't told Lou yet.
"Actually, can I put you on loud speaker so we can talk to my best friend, I haven't got the chance to ask him." I ask.
"Sure, you're on speaker too!" she laughed with another girl as I pushed the button.
"NAOMII!" Lou yelled.
"Uhm, yes? Who's this?" she asked with confusion, Lou just laughed.
"Louis, Liam's best mate." I heard gasps from the other line, did they know we were famous?!
"Louis Tomlinson?!" OH NO. "As in Mr.Tomlinson from Music!?" WHAT?
"Yes! Liam and I have been friends for a long time." he covered that up quite smoothly, its better than saying 'yeah! Liam and I are friends because we're in an internationally known boyband together!'
"OH.." the two girls say. "Anyways, where do I pick you guys up?" Naomi asked once more.
"Infront of the Arts building where Music class is." Lou responded.
"Okie dokie!" a beautiful voice came out, that must be her bestfriend...
We hung up and get our stuff and go outside to see a classic car parked in front with two girls leaning infront of it.
"Hey, Liam!" Noami smiled and waved, she stood up properly and so did her gorgeous friend.
"This is Felicity." she did jazzed hands to this girl who had blonde hair and these green eyes with a hint of blue in them.
"You can call me City, Felicity sounds too adult and old..." she scrunched her nose a bit, she looks too adorable.
"Nice to meet you." Louis waved at them. "You two are amazing violinists."
"Violinists?" I question.
"Yeah, we play the violin. It's our thing." City laughed.
"Should we get going now?" Naomi questioned, we agreed and gatehred in this expensive and priceless car.

"I can't believe you don't eat burgers, Naomi." Louis sighed as we get into the car, we've just finished eating lunch at a nearby diner in the campus.
"I just don't like 'em.." she shrugged and turned on the the engine, it roared so beautifully.
"Where do you guys wanna go now? Classes are done for me and City." she asked.
"Let's go hang out in our flat." Louis suggested.
"Sure, where do you live?" City asked.
"We'll point the way." I reply, safety precautions.. y'know?
We were close by and City's face was scrunched up like she was trying to remember something.
"You alright, City?" I asked.
"Oh uhm, yeah. It's just that.." before she could finish Louis had said to stop since we've arrived at the apartment building. "This is where we live!" the two girls exclaimed.
"Really?" Lou and I said in sync, they nodded happily.
"How odd." we all laugh.
We all get out of the car and head our way inside the main lobby.
"Do you mind if I just put my stuff in our flat first?" Naomi asked City.
"Bring mine too, would you?" Naomi said yes as City handed her bag.
"Just go to the 6th floor, room 4." Louis said as we entered the elevator, Naomi decided to take the next one since she also had forgotten something in their car.
"Yeah, see you soon." and like that Lou, City, and I were alone in the lift.

HEY THERE! New chapter :3 Don't ya worry, next one is gonna be posted up soon! Promise! Just a tad more like 30 minutes or so. ;)

Holly_G_1D
8/17/13
This is really good! Personally I prefer the first person writing though.
UPDATE!!!