When Liam and I get back home the kids and Lou are asleep on the couch.

“Well wonder what they did to all be so worn out?” I say

“Liam, not with everyone here” I whisper shout

Liam swoops me up and carries me up the stairs to our bedroom and lies me gently on the bed.

“You better get ready, the Payne train is about to come through” he says

Before I know it Liam’s lips are attached to my neck, sucking and nibbling gently. He knows when he does that I can’t resist him.

He stands up to take his shirt off, I stand and do the same. Liam then slowly moves closer and closer to me until our bodies are touching. My breathing picks up as he places a hand on my lower back as the other glides around gripping my bum. He pulls me in close and I can feel his bulge against my front, as Liam moves his other hand to grasp my other ass cheek he picks me up without hesitation and I let out a small gasp. 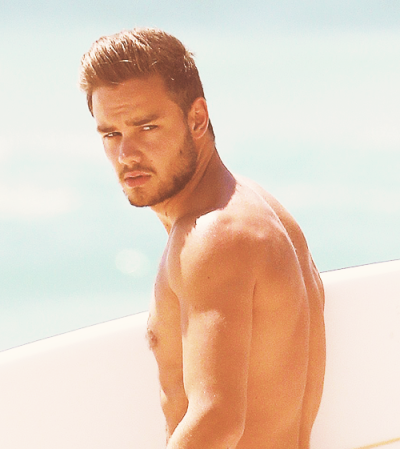 “feeling like you want to now” his voice was raspy in my ear.

Liam sets me down, he kneels down in front of me with a smirk on his adorable little face. He unbuttons the top button on my jeans then pulls on them as the rest come undone as well. I help him to unbutton his shirt by grabbing the ends and pulling; buttons fly everywhere.

“Fuck Bailey that’s my good shirt” he raises his voice

“Liam shut the fuck up and continue” I bit his earlobe.

As he gets out of his pants and boxers I ditch my shirt and panties. Liam makes a swift move and sets me on the edge of the bed he kneels down between my legs his hands barley grabbing my inner thighs.

“Stop teasing me and just do it already” I say

Liam moves his tongue up and down my slit and swirls it around my throbbing nerves.

I can feel him smirk against me.

Liam continues his magic on me before coming back up dragging his tongue up my front, stopping to kiss and suck on each breast until he finds my mouth again.

“You ready for the Payne train?” he smirks

Liam lowers himself down lining himself up with my entrance, as he inserts the tip my body goes into overdrive. It’s been a while since Liam and I have been intimate so my senses are on high gear. I let out a small moan and he stops what he’s doing.

“Am I hurting you?” he asks worried

Liam pushes slowly until his entire length is inside of me.

“Fuck Bails, you feel so good” he throws his head back

I grab at his biceps as he picks up his pace.

“Fuck Liam…YES” I shout a little too loud

“Shhh” Liam puts a hand over my mouth so I bite his hand gently.

We have found our perfect rhythm now as Liam decides to go a bit faster… and harder. I drag my nails down his back which causes him to moan out in pleasure.

I feel the tingle sensation start at my feel and make its way throughout my entire body, I start shaking and yell out as I release into pure euphoria.

“Hang on almost there” Liam half moans out

“FUCK!!!” he grunts and he throws his hips forward and his head back releasing himself as well.

Liam stays hoovering over me for a moment with his eyes shut, when he opens them I see nothing but pure love in those beautiful brown eyes. He falls to my side and roll so I am facing him.

“That was amazing” he says kissing my lips

“I love you more” he says
Thirty Minutes Later:

Liam and I get up and shower before putting on different clothes and going out to the kitchen to make something to eat. I hear Lou on the phone before we get to the doorway. Everyone is up now and watching cartoons and Lou paces back and forth along the landing.

“Well I don’t know what you want me to do. She has to have surgery in two weeks, I’ll just pick up extra shifts at the salon” I hear her saying

Liam and I say nothing and go into the kitchen, the phone starts ringing so I answer it.

“Bails?” I hear that Irish accent My heart literally jumps to my throat for a second before I answer.

“Great just who I wanted to speak to, listen can you tell Liam that H set up rehearsals to start on Friday.”

“Uhm yeah no problem” I say

“Ok great, so I’ll see you Friday then?” he says

“Alright…. Well see you then” Niall says as he hangs up the phone

I hang up on my end and put the phone back on the receiver.

“Who was that love?” Liam asks wrapping his arms around me

I turn around to face him now.

By this time Lou comes into the kitchen, she looks like a mixture of hurt, pissed and sad but mostly pissed.

“Ugh where do I begin?” she huffs

Lou tells me that her husband is bickering because she isn’t going on the tour this round because Lux has to have surgery on her leg. Harry and Lux were jumping on her new trampoline a few weeks ago and she fell off breaking her leg. The doctor put her in a cast but it isn’t healing correctly so they are going to rebreak the bone and set it with pins, so little Lux will be laid up for at least two months or longer. Her husband is just upset because of the money cut they will be taking. But she said she has it all under control and she will just work longer hours over at her salon.

“Ok, be safe and don’t be a stranger” I hug her goodbye

chapter four!!! whoo hooo.. let me know what you think so far :)