Its been four long months, the guys are finishing up the tour with only three more American states left; California, Nevada, and Arizona. Liam and I haven’t spoken so much as one work to each other in months as well. I decided to fly back home to London bright and early the next morning after our fight. The first thing I did when I got back was go straight to the Oxford County courthouse and filed divorce papers, the divorce should be finalized in as little as two months. It would be sooner but I have to prove that I’m not just divorcing Liam to aquire his money which I think is bullshit. I don’t want anything from him, just for him to be put in my past where he belongs and stay there this time.

I took the kids and flew back out to Oakland, California to surprise Niall. I miss him too much to be away for that long. I must admit though, he’s always been right about Liam, back to Annie though, I can’t believe how big she’s gotten, only three months to go then Zayn and her will defiantly have their hands full; but I think they will make fantastic parents.

“Pssst, Bails can I talk to you about something for a moment?” Hendryx pulls me to the side
.
“Yeah, hey Annie I’ll be right back” I tell her

Hendryx pulled me away from Annie just so she could tell me all about how Harry and her are shacking up.

“What do ya mean?” Hendryx asks

“The public show of affection is overwhelming at times, trust me we all pretty much thought you guys were having sex. We just didn’t ask or say anything” “So is that all you wanted to talk about? How you and The Harry Styles are having the most fantastic sex ever?” I ask dramatically

Hendryx sneered at me. She said she came to invite me, Annie and everyone else out for dinner tonight. She said Harry and she had an announcement to make.

Later that night we all gather in the atrium of the hotel we are at and make plans to meet at Cool Basil Restaurant. We climb into two different vans that are being driven by Paddy and Mark. When we arrive to our destination there is a long line of people out in the front so we drive around to the back so we won’t be swarmed by people. Finally after we are all seated in a private section Harry and Hendryx stand up and the head of the table and use their knives to tap lightly on their glasses.

“Can we have your attention please!” Harry shouts a little due to the background noise.

Everyone stops talking and puts their full attention towards Harry and Hendryx. I can see that her face is turning red with embarrassment because she hates making public announcements. Harry is holding her close to his side though so she’ll be ok.

“So when’s the wedding?” Louis blurts out

Harry and Hendryx look at Louis and smile then look at each other.

“Um it’s not a wedding exactly… not yet anyways, do you wanna tell them?” Harry says

Hendryx hesitates for a moment before standing up tall with confidence.

“Harry and I,,, we.. we are going to have a baby” she says nervously

We all sit quietly for a moment in shock ourselves. None of us were expecting pregnancy; a wedding maybe, but defiantly not this.

We all get up and take turns hugging both and congratulating them on their new addition to the crew. I notice Liam is hanging back just sitting at the table rather than congratulating his band mate on his exciting news. Which is nothing new, he’s still being a stuck-up son of a bitch. I take it his attorney hasn’t gotten in touch with him yet about the divorce papers I filed.
Later that night I am relaxing in Niall’s room, while the girls sleep in the next room on the couch. I am watching a movie when I hear a small knock on the door. I get up and go open the door, to my surprise Hendryx is standing on the other side.

“Hey love what are you still doing up?” I ask

“Ugh the guys are being too loud and I can’t sleep, can I hang out in here with you?” she asks

“Of course, you can, I’m just starting a new movie actually” I say

“Only the best movie ever.. The Great Gatsby” I tell her

“One of my favorites, isn’t Leo just so divine” Hendryx waves her hand as she strolls by me to the bedroom.

Hendryx crawls up onto my side of the bed and I crawl onto Niall’s side. We get snuggled into the heavy white featherdown comforter then I press play on the remote. It’s not too long into the movie before we both crash. I wake up startled by the loud noises of Niall stumbling into the room.

“Shh Niall it’s 4am be quiet” I hush him

“What are you girls doing?” Harry comes in now

“Well we were watching a movie but fell asleep” I say

By this time Hendryx is awake so she answers for me.

“Only the greatest movie of all time.. The Great Gatsby”

Harry and Hendryx leave and go back to their room to sleep the rest of the night. Which leaves me alone here with a drunk Niall to deal with. After locking the door back up I go back to the bedroom to find him sprawled out across the bed fast asleep. I go to him and take off his shoes, trying not to wake him. It doesn’t work though he gets up, pulls off the rest of his clothes except for his boxers and climbs back into bed. I go around to the other side and adjust the air to make it cooler in the room then crawl up in bed and get settled into Niall’s side for the rest of the night.

“Goodnight love” he kisses my neck

“Goodnight” I say
The next day Niall, Zayn, Harry and Liam are all still sleeping at 4 o’clock in the afternoon, when Paul comes in to yell at each of them.

“Alright lads get up. Three hours until show time, let’s go!” he shouts at all of them

They all groan as they drag themselves out of the bunk beds and off the bus. We got up early and loaded the busses and drove to Las Vegas for the show tonight. That means two more shows and we go back home.

“So, are you ready for Vegas tonight?” Annie asks me

“Well don’t you and Niall wanna get hitched?” she laughs

“Anakova! I’m not even divorced from my husband yet so no. At least not right now anyways” I tell her

“Well Z and I might get married after the girls are born. Then again, we might just go do it when the show is over tonight at one of those one hour wedding deals on the strip, then have a big wedding after the girls get here” she laughs

All I can do is look at her and roll my eyes, only my best friend would come up with a crazy plan like that.

“Can we just get to the arena and get situated before they go on please?” I say

“Fineee, whatever you say boss lady” she whines

Hendryx, Annie, the kids and I all ride with Paul, Niall and Harry over to the arena. Before Niall goes back to get his hair done and get dressed he hugs Everlee and Hadleigh then he gives me a sloppy, wet kiss before skipping off like an ass.

“You’re daddy is a goof ball” I tell Everlee

okay chapter twenty everyone!! please let me know what you think.. and can we just take moment to ponder on this photo of Niall!!!! this may just become my laptop wallpaper now! anyway as always i love you all xoxo please if you haven't rate, subscribe, leave comments. 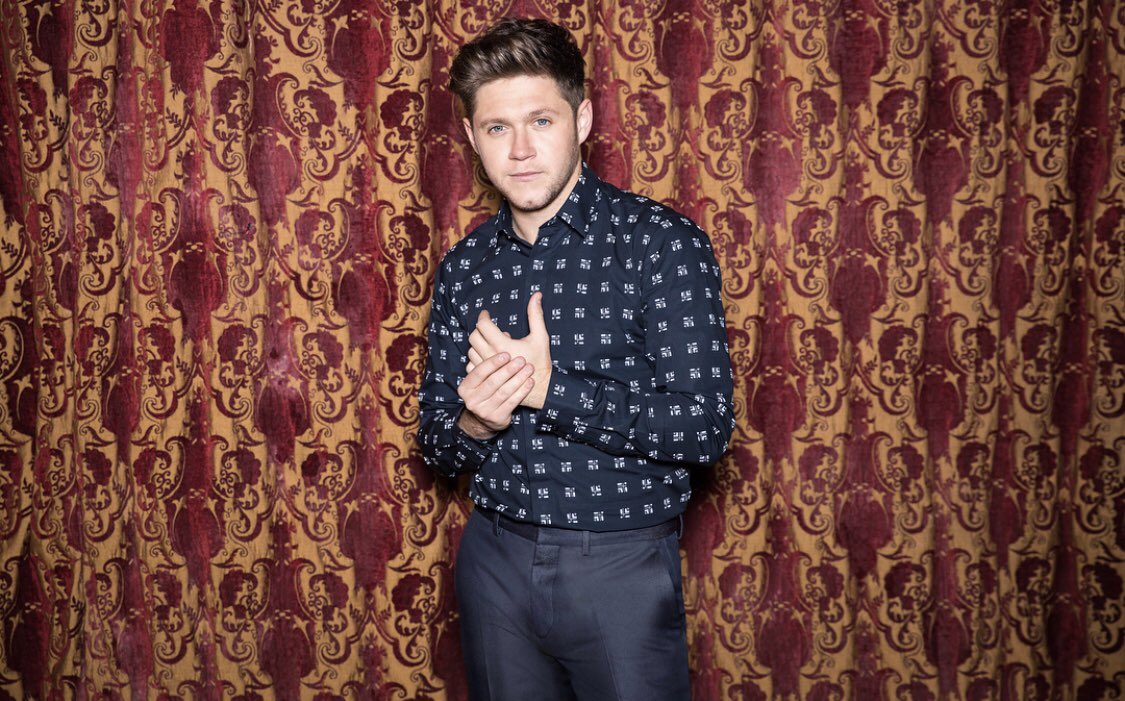