We have become rather close through these years. He has learned to deal with the blood and actually has rather enjoyed having the ability to transform into not just a werewolf but he can change into any type of dog. He still needs to master that ability. So I decided that we would do that today.

I went to his room and knocked on the door. “Harry, it’s time to wake up.”

I heard him getting up and ready for the day. He then opened the door.

“Ello’ Sarah, what are we going to do today?” He said while flashing his gorgeous smile and leaning up against the doorframe.

“Well, I’m going to teach you to master your dog transformation ability because we are going to need it today.” He looked like he was going to ask a question but stopped himself.

I turned around and we both flitted to the forest. I inhaled to make sure that there were no humans around to bother us. We both stood facing each other at least 20 yards apart.

“Now imagine what a German Shepherd looks like.” I could tell he was really trying to focus.

“You have the image in your head?” He nodded his head.

“Now feel your muscles ripple into the structure of the German Shepherd.” He nodded and then I saw his muscles start to take the shape of a German Shepherd, but then in almost an instant he changed into his werewolf form as seen below. 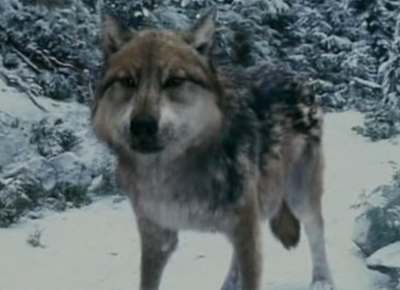 I walked over to him. “You had it but then you lost it. You have to remember the structure in order to stay in that form.” He nodded his head. After about 20 minutes he had mastered the mind ability to stay in the dogs form.

“Now, I want you to transform into a chocolate lab puppy. And remember just concentrate on the image in your head and it should work for however long you think about it. Ok?”

I watched as his muscles began to change into the structure of a chocolate lab puppy. That looked a lot like the one below. “Great job! Harry! At this rate you will be able to subconsciously control your form in your thoughts.” I was about to say something when I had another vision. There was a high school in Mullingar, Ireland. It wouldn’t take that long to get there. I saw a group of kids picking on this one boy. They were beating him up in the nearby ally and he couldn’t do anything to try to defend himself. There were just too many boys there. Then they left him there barely breathing. Just then the vision stopped.

I looked down at Harry still in dog form. He sensed something was wrong.

“Harry, you can change back now.” I watched as he shifted back into his ‘human’ form.

“What’s wrong? You paused. Is everything ok?” Harry asked.

“We need to get going now, or we might be late.” I said while trying to conjure up the vision again to get a better description of where he was.

“I will explain later. We need to save him first.” He nodded and followed me. We very carefully flitted together to Mullingar the exact spot where it would all happen in just a few minutes. Harry and I hid behind the garbage cans in the alley and waited for it to happen.

“You never did tell me about what your powers were and now that we have time, I would really like to know.”

“Well, my power is to see the future, but it sometimes isn’t always accurate because people can change their mind. I had a vision of what happened to you, so I went to save you. When we were in the woods I had a vision of the boy that will be the second addition to the group.”

Almost as if on cue, the boys came around the corner with the boy in my vision. They threw him down and started beating him. After a few minutes I realized that if they continue then he will be dead and I won’t be able to save him.

“We need to do something, or I won’t be able to save him.” I whispered to Harry.

“Well, what do you suggest we do?”

“I am going to get up and tell them to stop. If they don’t listen, then that’s when you come in the picture. If anything, they would be a nice snack.” I licked my lips hungrily.

“That means that there are two for each of us. Now I need do something, before they beat him to death.” I got up and yelled at the boys, “Stop! You are hurting him.”

They stopped beating the boy and stared at me. I saw their eyes travel up and down my body. “Why hello ma’am. I’m sorry but this is private business, a young lady like you shouldn’t be watching this.” One of the boys walked closer.

“You are so pretty; I would really hate to kill you.”

“Who said you have to kill me?” I got closer so that my mouth was hovering over his neck. I could literally feel his pulse beating. I could feel the blood rushing through his veins.

He pushed me up against the wall and right as he did that Harry stood up. “Get your bloody hands off of her.” The boy looked over at Harry and I took that opportunity to sink my teeth into the boy’s neck. I made sure not to inject any venom into him. After I finished him off which wasn’t that long, I looked up at the other 3 boys, who were standing there staring in shock.

One of them were about to run off but Harry stopped him and slashed his throat and started drinking the blood as well. The other two knew their fate and with one swipe of my hand: I slit their throats so that they couldn’t yell and they fell down dead.

Once we got to the mansion, I went to one of the empty bedrooms and set the boy down. I could barely hear his heart beating anymore.

“I don’t know if you can hear me or not but this might hurt a little.”

I sank my fangs into his neck and started pumping in the venom. I only wanted him to turn into a half-vampire. After I finished, I ran my tongue over the spot where my fang marks were on his skin and it healed. I then got back up and licked the remaining blood from my lips. I got a bag of blood and left it by his nightstand for when he wakes up.

I then quietly shut the door and walked around to find Harry. I found him lying down on his bed in his room. I went over and laid down next to him.

“Hey, you did a good job today.” I said while looking at him.

“Thanks.” He said rather glumly.

“I was hearing things while we were there, is that normal?” He said while looking at me.

“Hearing what kind of things?”

“I heard people’s thoughts, or at least it sounded that way.” He sighed.

“What’s wrong with that? It seems to me that you can read people’s minds. I bet people would kill for that power. It gives you the advantage I guess.”

“Yeah, I guess but I don’t understand.”

“I don’t understand why I can’t read yours. I mean I can hear your thoughts only when we are in wolf form, but I can’t hear them when we are in our ‘human form’.”

“That’s because when I’m a wolf we have to communicate someway so I open up my thoughts to you. When in my ‘human form’ I keep my thoughts hidden from you.”

“It’s not safe for others to know my thoughts. I found that out the hard way.”

“What do you mean?” He asked. I ran my hands through my hair and I sat up on the bed.

“I had a best friend; he could read minds just like you. Something happened and he turned against me and he used all of my thoughts from when we were friends; he destroyed everything I held close. My parents were alive at the time and he went to my house while I was out. I came home and found my parents dead. I also had a dog at the time; he was the most docile dog you could ever meet. He would never hurt a soul. He had mutilated him as well.”

I could feel a tear slide down my face. I quickly wiped it away. Harry sat up and hugged me.

I looked up at him, “that’s why I keep my thoughts to myself. I don’t want the wrong person to get a hold them and use them against me. I wouldn’t be able to stand it.”

“I would never do that to you, besides I won’t let anyone mess with you. They would have to go through me first.” I couldn’t help but to smile; it’s nice to know that at least someone cares.

“Thanks Harry. I’m glad I can count on you it really means a lot.”

He was facing me and I could feel his breath on my face as he leaned closer towards me. “I’m serious, Sarah, I will protect you as long as I’m with you.”

Our lips were just inches apart. Right before they could connect we heard a knock on the door.