Why Did We Have to Fall in Love?

She was leaving me. I know she is doing it to get away from everything but I couldn't help but feel a little bit betrayed. We were gonna move in together when I turned 18 which is only a few months away.

I better get going if I'm gonna see her and the boys go on to the flight back to London so she can meet the people at Modest! Management. I'm gonna miss her so much.

*Ring, Ring, Ring*
I looked at the caller ID. Harry.

"Hey Harry. What's up?"
"Hey Bethy." I love it when he calls me that. "I was wondering If you wanted to come to London with me."
I was stunned.
"Beth? I'm sorry maybe it's too soon. It's just because I know Sarah is moving to London. I thought maybe you might as well to be with her. You know?"

Whoa. Me? Move? To London? with Harry?

"YES OF COURSE I'LL MOVE HOLD ON!!!" I practically screamed down the phone.

I took the phone away from my ear and ran to the top of my stairs.

"MUM!!! I'M MOVING OUT!!!!" I called down to my mum. She came out of the kitchen holding a teaspoon and a jar of coffee.

"WHAT DO YOU MEAN YOU'RE MOVING OUT?" She yelled back.

I ran back to my room and pulled out all my suitcases, put Harry on loudspeaker and began to pack while he continued talking to me.

I was standing with Eleanor, Liam, Zayn and Perrie waiting for Niall, Sarah, Harry and now Beth at the terminal which our plane would be taking off at.

The plane is taking off in like 15 minutes where the hell are they? I turned round on the spot to look around to see if I could see them anywhere. No sign of them anywhere.

*You and I we don't wanna be like them, we can make it till the end* my phone began to ring.

"Hey Lou." Niall's voice was on the other side of the line.

"Where are you Niall?"

"We have just gotten past the security. Are you guys at the terminal?"

"Yeah. We are just waiting now for Harry and Beth."

"Beth? Why is Beth coming?" He asked sounding confused.

"Didn't Harry tell you? She's moving in with Harry I believe."

He hung up and within about 2 minutes Niall and Sarah were waiting with us.
Sarah got greeted with hugs from El and Perrie and "hi"'s from Liam, Zayn and me.

Just as we were about to sit down on the waiting seats to board our flight the intercom went off.

"I wonder what's going on." Zayn said to us all, he got up as did the rest of us to walk to the customer service desk.

It took us nearly 5 minutes to get there.

Liam walked up to the desk and said our names. Then a middle aged man in a navy suit asked us to follow him. We followed him into what I think is the main staff room, he turned to face us then said,

"Glasgow Airport got a call from both Modest! Management and a man by the name of Paul. Modest! saying that the One Direction party will not be flying back to London and that Paul will explain. Paul then called saying that Harry Styles and a young girl called Beth have been in a car accident and that you all need to go back to the hotel which you were in previously." 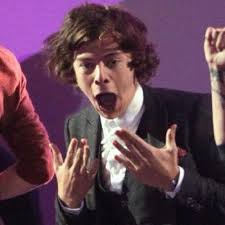 right now because of the cliffhanger.

Plz update and I hope u r ok with the police business n stuff any who updat when u can love the story!!!